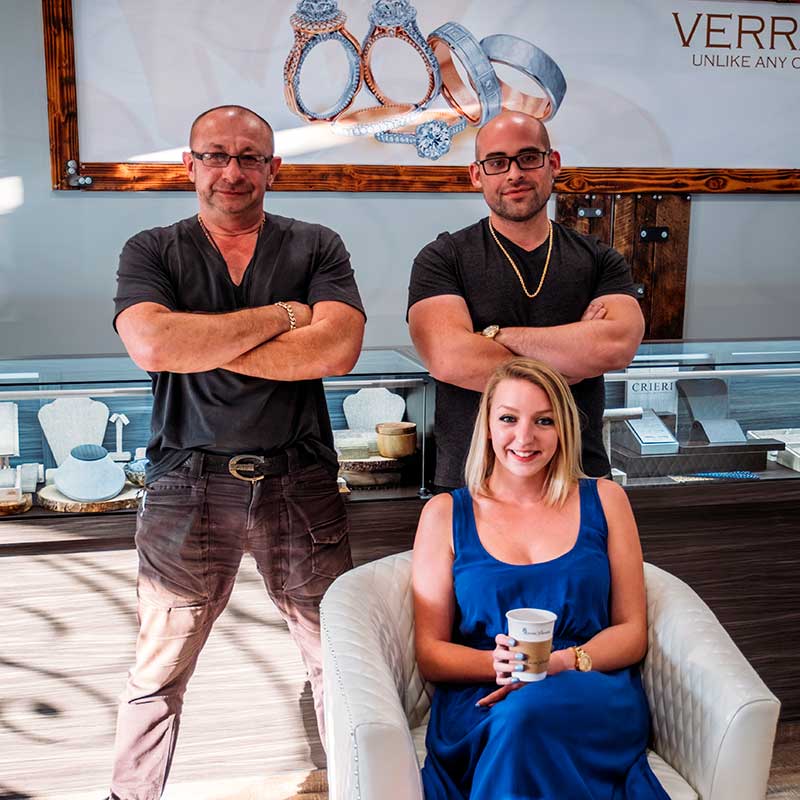 Like many Russian Jews who managed to emigrate in the twilight days of the Soviet era, Gary Spivak’s family left everything behind to pursue the dream they were denied in their native land.

A talented and driven artist, the future jeweler was rejected from art school three times as a teenager. Finally, a family friend with government connections explained that there was no point reapplying.

“He knew it was because my passport said ‘Jew,’” Spivak recalled. “That was the final straw.”

His father, a collector of valuable fine art books, sold everything to finance the family move. And on May 10, 1979, one day after Spivak’s 16th birthday, the family arrived to start a new life in America, settling into the Russian community in Northeast Philadelphia.

Spivak said he found himself thinking more and more about those early struggles in recent days while putting in the work to turn an empty Cherry Hill storefront into a home for his family’s new, full-service jewelry business.

“This is what the American dream is all about,” he said. “We came to this country without anything—with literally nothing. This is what my family has built.”

After spending more than two decades as the head jeweler and manager of a local jewelry store and building a reputation for custom designed jewelry and engravings, Spivak and his son Josh, 26, an expert in computer-assisted design (CAD), felt the time was right to strike out on their own.

“In the last five years, maybe a little longer, people have been starting to appreciate jewelry that is more artistic,” he said. “They see it now as wearable art.”

Spivak Jewelers, which opened earlier this month in the shopping center adjacent to the new Penn Medicine, is a work of art in itself. The floors, molding and mantelpiece are created from warm reclaimed wood. Even the security bars on the windows are artistically crafted.

“The design came from inside my head and is handmade with help from a friend who is a metal smith,” he said, noting that he also crafted the curtains himself.

Although the initial dream was to become an artist, Spivak realized his true passion was jewelry design after a few semesters at the Philadelphia College of Art. Instead, he pursued apprenticeships with talented Russian jewelers. From there, as he says, “there was no stopping me.”

“There is nothing in this industry I don’t know or cannot do,” Spivak said, noting that all services—from helping customers chose loose diamonds for custom rings to sizing, engravings and repairs, are done in-house.

As for Josh, he has spent his entire life around jewelry, having had no choice but to tag along with his parents to jewelry shows as a young child. By his teenage years, he had absorbed so much knowledge about the business that he was buying gold from people, changing watch batteries and even helping customers pick out engagement rings.

“I told myself the last thing I wanted to do was go into the jewelry business,” Josh recalled. “But then I decided to try it out because I had picked up so much background knowledge.”

This turned out to be a good move. After graduating from Cherokee High School, Josh attended the Gemological Institute of American (GIA) in Manhattan, New York, graduating in the top of his class as a gemologist. After pursuing further studies in Iowa to learn CAD, he landed a coveted internship with Verragio, a leading bridal brand, where he perfected his design skills.

In their own shop, father and son work together on every custom job, from turning hand-drawn designs into 3-D renderings and then to finished product, Spivak said.

“We have the ability to turn your ideas into jewelry,” he added. “Whatever is on your mind, if you can tell it to me, I can draw it out. I’m using your eyes and your expression and then Josh goes to the computer and turns it into a 3-D designs. There is so much that’s special about it. People treasure it as family heirlooms to pass on to future generations.”